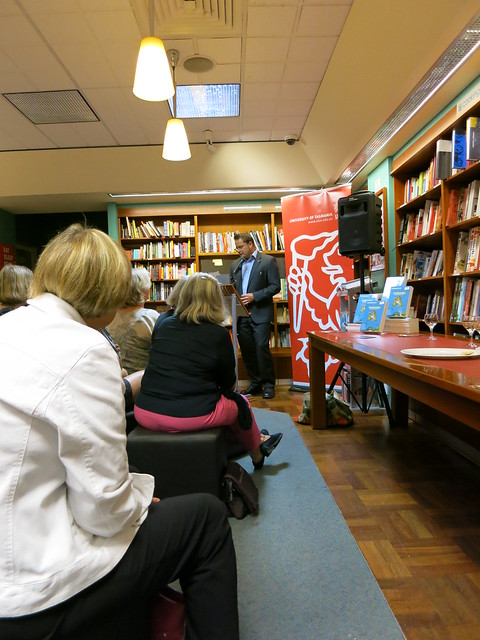 Peter at the February 14th launch in Canberra

Thank you to the Griffith Review for selecting “Tasmania: The Tipping Point?” as the topic for their most recent edition.

All debate and critical analysis is very healthy, and is much needed on the future of Tasmania.

“Tasmania is at a critical point in its economic development. It has the country’s highest unemployment and lowest wages. The inability to adapt to the changing world economy is the primary cause of Tasmania’s ills. Tasmania has continually attempted to regain prosperity by relying on the industries of the past, based primarily on resource exploitation. It is now vital for Tasmania to chart a new economic direction. New industries, new markets, new ways of doing business will be required.”

Some selective recommendations featured in the report’s final 10 point plan for industry focus:

“Knowledge intensive industries, economy based on environmental protection, natural environment and links to tourism, branding our food, and lifestyle.”

The aim of this report was to help the Greens deliver prosperity and happiness to Tasmania, and a resilient economy based on targeting our state’s strengths.

“Clean, green and clever” – does that also sound familiar? This quote first appeared in the same 1992 report, which suggested the Tasmania economy could become a centre for global excellence in “Clean, Green and Clever” industry. This quote, which is widely used today, was first coined by Christine Milne back in 1992.

It is so common today, it is almost a throw away. I just wish those who use it today, from all political parties, properly understand its context and evolution.

Considerable economic change, along the lines of this report, was already underway in Tasmania when I entered the debate 10 years later in 2003. The slogan “old economy versus new economy” was used extensively by campaigners, the media and politicians during the last 10 years of the Gunns Pulp Mill campaign (an event much commented on in the Griffith Review).

The Pulp Mill campaign in Tasmania crystalized, and openly publicised, a community divide on the economic directions of my state.

At a large pulp mill rally in Hobart, a local primary school teacher introduced herself to me, and told me how she had her students use role play to help them understand the Pulp Mill saga which was consistently in the news. She informed me I was one of the characters called “new economy.” She then said, “John Gay - CEO of Gunns, was the old economy.” Things have come a long way, perhaps?

The Pulp Mill was lots of different things, but it was more than anything a clash and contest of visions for Tasmania.

Perhaps this campaign will be looked back at by historians as a Tasmanian “tipping point?”

The Pulp Mill project hasn’t been able to secure finance for the past four years. It certainly has shown Tasmanians, whichever side of the fence they sit on, that today we no longer have the luxury to go back to the industries of the past. Globalisation will see to that.

So economically I would argue that Tasmania is not currently at a tipping point, it has been tipping slowly for some time, and our economy is well into a transition.

In a new report the Australian Greens will be formally reviewing this transition since 1992, including our outline for a new 20 year economic vision for Tasmania. We will be hoping for constructive criticism, feedback and debate when it is released.

Talking about tipping points, the economy is not everything, as the old line goes we “live in a society, not an economy”. So what about society and the environment?

The rich social tapestry of Tasmania life, outlined in much colour in the Review, speaks for itself.

It has always been a state of significant social contrasts. Because it is heterogeneous, I feel it is unlikely to reach any tipping point soon. This diversity is a strength. One social dynamic not largely explored in current research is the impact of demographic change on the Tasmanian economy.... that of “blow-ins versus locals.”

Some have suggested that over the years the “sea and tree” changers who have bought their savings, insights and energy to Tasmania have created our own version of a “two speed” economy, including a stark cultural division. I have never seen any convincing analysis of this. I’m not sure how many living in Tassie are “true locals,” or what their socio-economic distribution around the state is, and how this correlates with income and unemployment, but it would make for an interesting future study.

And environmentally? Will the IGA deliver “peace in our time,” based on sufficient conservation and employment outcomes?

We will know soon, but if it does, this surely must be taken seriously as a potential environmental tipping point.

Interestingly, many who argue against the IGA do so from the perspective that it is throwing a life-line to the forestry industry -which they feel should be allowed to shipwreck, and totally drown in the strong currents of globalisation. Viewed from this perspective, the IGA may in fact be an obstacle to allowing an important environmental tipping point to occur.

And politically? I’d like to see Tasmanian politics at a tipping point, but you would expect that from a Greens Senator. The Greens are a party of change, who had their birth in the protest movement. We are always advocating for political, social and economic change.

Tasmanian politics seems dominated by what my father calls “group think and group speak.” He also believes this politically influential network of Tasmanians and organisations have never had an original idea between themselves.

For example, listening to the rhetoric of the Tasmania Liberal Party, the message is simple. Vote for us and we will tear up progress, take Tasmanians back to their comfort zones, ignore reality and go back to the good old days. The constant rhetoric on reviving industrial old growth forest logging, wood chipping, and building unoriginal, socially divisive, questionably economic “mega projects”  on the bottom of the world, is one clear example.

Labor’s decision last week to put short term jobs and corporate profits ahead of protecting the Tarkine – throwing away 10 years of hard work on heritage listing - and putting at risk the critically endangered Tasmanian devil  and large tracts of unprotected Gondwana rain  forests,  is another example that not much tipping is going on at all.

So an important theme, largely unexplored by the authors of this Griffith Review, is the role that Tasmanian political culture has played  in Tasmania reaching any “tipping point”- if indeed that’s what it is.

Should we separate cause and effect?  Decry pollies as villains or victims? Writers such as Richard Flanagan have breached this space, but more work needs to be done.

Maybe it’s the Greens influence in parliament – federally and locally in Tasmania - that is facing the tipping point. I hope not, having now seen how the political machine works.

I totally understand why Australians need another voice in parliament.

Off course you would expect me to say this out of my own self interest, but I note attempts to remove the Greens from parliament previously have failed.

And for good reason. We are a party not afraid of the challenges and opportunities found in tipping points, in fact we welcome and encourage change.

I would just like to finish with a few personal comments and one quick story.

I didn’t move to Tasmania to make money, or become wealthy.  Quite the opposite in fact. I moved here to escape a life of chasing the buck, and to explore other things.

For me, Tasmania was the land of opportunity. A regular Aladdin’s Cave, full of jewels that money couldn’t buy.

This is deeply felt.

I have a confession to make. The day Julia Gillard called this year’s September election - two Thursdays ago - I went surfing. It was after work of course - whatever that means in my new role.

My mate Tom and I slipped into the ocean at 6.45 pm, dusk, and paddled out through a river mouth, lined with ancient rock cliffs and forest, more than 1km out to sea, over dark kelp beds, watching one the most perfect waves  in the world  break on a sand bar that suddenly appears in the middle of the ocean.

After hours of mindlessly perfect surf, chats to the surfing brotherhood and high fives, I paddled in just on dark. Waiting on the beach for Tom, I listened to the roar of the ocean, observing the dark mists rising over haunting Maria Island and the Weilangta Forests, home to Tassie’s endangered Swift Parrots.

I’m not sure how a human being could feel any closer to nature, my whole essence was dripping ocean, contented, alert, alive and glad, very glad I was living in Tassie.

No money in the world could buy this feeling, and the many other moments Tassie life has delivered to me and my family.

My favourite philosopher- the ancient Greek Epicurus - would be proud of the last chapter of my life. It was his wisdom that was my anthem for “downshifting.” He proposed three paths to happiness in life.

To be happy, he said a person needed to live a life of relative self- sufficiency, rather than one of wealth accumulation, surround themselves with loved ones, and take time out for peace and contemplation.

Be hedonistic by feasting on those simple things relatively free in life.

Epicurus believed this would give an individual enormous strength by providing perspective.

Living in Tasmania has then provided the backbone of my perspective.

This is lucky, because at times life in Tassie is far from easy sailing.

For those with a strong will and a different vision it can be a life of relentless, endless struggle. However I can’t help admitting that I feel empowered by living in a community where an individual’s spirit is truly judged by the size of the battles that they fight.

Perhaps recognition that you can make a difference to the future in a place like Tasmania is what drives many in the community, and deep down provides a meaning to our lives.

Tipping point or not, this spirit of Tasmania won’t be something that will ever change.

Greens to preference Labor to kick Morrison out